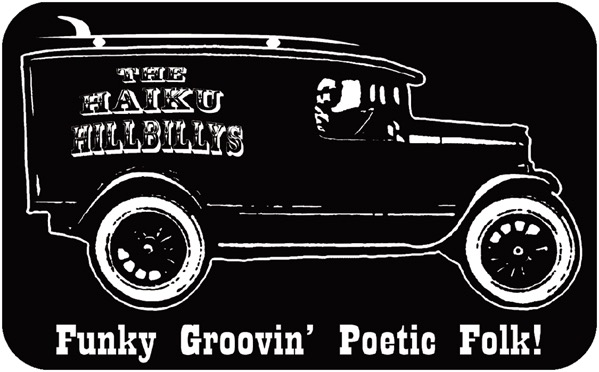 Brothers-style rocking jams, the Haiku Hillbillys
stand out as a unique presence on Maui’s music
scene.
Led by Randall Rospond, the Hillbillys
are about to release their debut
CD, which they will promote with a
party at Charley’s on Oct. 10.
This versatile work showcases the talented
group in a live and studio setting, with six
tracks recorded at Charley’s, two on
Mana‘o Radio and four in the studio.
Besides Rospond, who composes
most of the group’s songs, the band
comprises Rand Coon on guitar, banjo
and vocals; John Pollock on violin, mandolin
and vocals; Tom Conway (of Gypsy
Pacific) on lead guitar; Geoff Coolidge on bass,
Jimmy C on drums and vocals, and Klaus Simmer
on keyboards.
Depending on the venue, the musicians perform in a
variety of combinations from duo through the full seven-piece
band. “Tommy and I do a duo, and the violin player and I do
a duo,” Randall explains. “The trio features John on violin
and Rand on banjo, and we do that on Thursdays at the
Hana Hou Cafe. If you go to the Stopwatch you see five of
us, and at Charleys there’s seven, and each setup is different.”
Recorded at Charleys, the 10-minute track “Seek and
Find” eloquently captures the breadth and dynamics of the
band. Opening in toe tapping, Nitty Gritty Dirt Band-style
country/bluegrass territory with prominent banjo and fiddle,
it segues into an Allman Brothers-flavored jam propelled
by Tom Conway’s wailing guitar, and rewinds back and forth.
“So many people know us live and we’re so different
than seeing the trio play which is like a quieter front porch
thing,” Randall continues. “Then they see a big show with
the seven-piece band and it goes way outside. I wanted to
spotlight Charley’s because people have been very receptive
when we play there. It’s a big room and people are allowed
to dance. Because of the liquor (commission) thing there are
so many places where you can’t dance legally on Maui and
that astounds me. At certain gigs I have to tell people, sorry
you can’t dance.”
Randall has described his band’s music as:
“Funky, Groovin’ Poetic Folk !”
“I came up with it one day,” he says. “It could describe the
band and the music. I approach music from a poet’s angle.
I started out mesmerized by the Beat guys, then I got into
the lyrical rock writers from Bob Dylan and Jim Morrison
to Lou Reed and Patti Smith. On the Mainland some people
catch on to the poetic meaning of Haiku.”
With influences that run from country and bluegrass into
rock, the new CD features studio songs by Rospond such as
“So Long Mr. Chaos”, “Workingman’s Blues” , “Trail of
Tears Saloon” and “Turn it Around,” which encourages
personal transformation.
“I was performing at a music club in my hometown
(Toronto, Canada) on a brief family visit, and I wrote this
song to reach out to a lot of the younger folks who were
coming to the club,” he explains. “The club was in a rough
part of downtown with lots of bad vibes and bad drugs. I
thought the chorus, ‘turn it around’ might help some of the
listeners connect with the positive, the light within their own
eyes.”
Aside from Rospond’s songs, the album features 2 colorful
instrumentals by banjo player Rand Coon, “Kahakuloa
Sunrise,” and “West Kuiaha,” which resembles the playful,
folky side of Pat Simmons’ contribution to the Doobies.
“Rand adds another aspect,” says Randall. “He’s into that
old school bluegrass style.”
It was Coon who sparked the formation of the acoustic
side of the Hillbillys on Maui. “About six years ago Rand
had an ad wanting to play bluegrass with people,” he recalls.
“I phoned him and said I love bluegrass, but as a songwriter
I don’t play in any particular style. We got together and found
common ground. Now we’re just starting to touch on some
original reggae and rock songs. I’ve got about three or four
hours of original music that we haven’t touched on yet.”
■ The Haiku Hillbillys present a CD release party at
Charley’s on Oct. 10. The Haiku Hillbilly Trio comprising
John Pollock, Rand Coon and Randall Rospond play from
6 to 9 p.m.Thursdays at the Hana Hou Café. Tom Conway
and Rospond will play Cafe Marc Aurel from 6 to 11
p.m. on Friday as part of Wailuku’s First Fridays promotion.
And Rospond will perform and sign CD’s from 4 to
6 p.m. Oct. 24 at Be Happy Books and Music in Paia.

Permanent link to this article: http://randallrospond.com/randall-on-demand/interviews/maui-news-article-by-jon-woodhouse-2010/